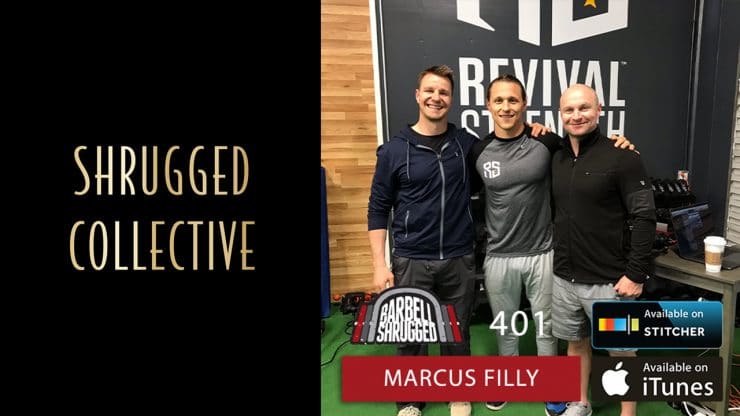 In this episode of Barbell Shrugged, the crew talks to Marcus Filly about his history from MD to finding CrossFit and his mentor James Fitzgerald and OPEX. Through  multiple trips to the CrossFit games and a team and individual, a season in GRID, and how he began the functional bodybuilding revolution.

Marcus grew up in the San Francisco Bay Area. He played multiple sports as a child including soccer, baseball and golf, which eventually led to a collegiate career in soccer at the University of California, Berkeley. There he earned his degree in Molecular and Cell Biology with an emphasis in Nutrition and Physiology. After Berkeley he complete a year of graduate work at the Ohio State University School of Medicine.

His interest in both athletics and human health and performance eventually led him to CrossFit in 2007. He has gone on to compete at the CrossFit Games 6 times, three times as an individual (2016 12th fittest) and three times as a team member (2012 6th fittest team). Marcus is also the captain and member of the Phoenix Rise in the NPGL. For two years he has been voted to the all GRID league team, in 2016 earning 1st team honors, and in 2015 earning the award for leadership excellence.

Marcus has been a health and fitness coach for 8 years since leaving Medical School in 2009. He was formerly a CrossFit facility owner for 5 years, has completed all 5 of the OPEX CCP courses, and has coached clients remotely from all over the world. He has coached athletes at the CrossFit Games as well as several Regionals athletes.

0-10 – The early days of being a competitive CrossFit athlete

21-30 – Finding the next step after CrossFit

Join the One Ton Challenge Leaderboard, record your PR’s and track your progress.

“What is the One Ton Challenge”

“How Strong is Strong Enough”

“How do I Start the One Ton Challenge”

Use code “SHRUGGED” to save 15% on the best recovery tracking tool in strength with Whoop.

Visit www.vuoriclothing.com/shrugged to save 25% for all athleisure clothing wear