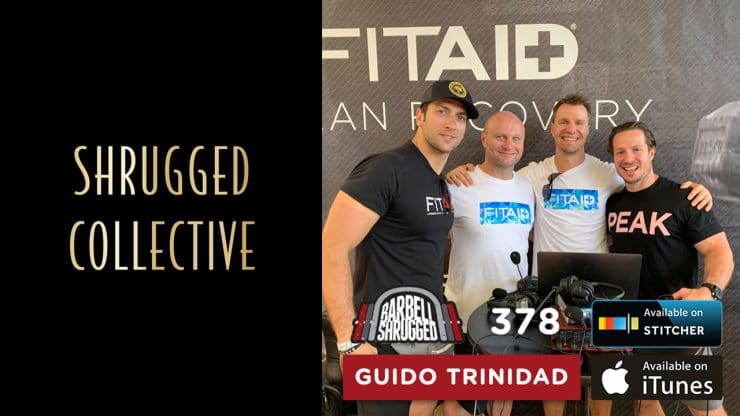 Guido Trinidad is the owner and Founder of Peak 360 CrossFit. Guido began CrossFitting in 2008 and hasn’t stopped since. Along the way, he has earned himself a trip to the CrossFit Games, 6 South East Regional appearances, and a Peak family that he could not be more proud of.

Guido is a family man, owner and founder of Peak 360, and the creator of Wodapalooza. Guido helps teach people how to  enjoy the process of becoming a better you while not being too hard on yourself. He views training no as a class you take a couple of times a week, but instead as a place where people get to be active and have fun.

In this episode of Barbell Shrugged, we talk about where Guido’s journey started, how he opened Peak 360 with just $3,000 in the bank, the creation of Wodapalooza, the keys to building culture, the secret to having jacked arms, where the sport of Crossfit is headed, and much more.

⚡️11-20: The creation of Wodapalooza and the experience of failing in business

⚡️21-30: The value of saying yes, understanding your capacity, family life, and Guido’s love for Peak 360

⚡️31-40: Nutrition, how Guido and Noah’s relationship started, and the keys to building culture

⚡️ 41-50: How being a competitor helped Guido create Wodapalooza, where he found inspiration for various aspects of the competition, and the details of running a competition

⚡️51-60: The secret to having jacked arms and the changes to the Crossfit Games season

⚡️61-70: The art of programming for Wodapalooza and the highs and lows of being a perfectionist

⚡️81-90: Fostering discipline, the importance of personal growth, and the low down on being a dad

⚡️91-100: The importance of how you react to constructive criticism and Guido’s vision for the future

⚡️101-110: Breathing practices, meditation, and where the sport of Crossfit is headed