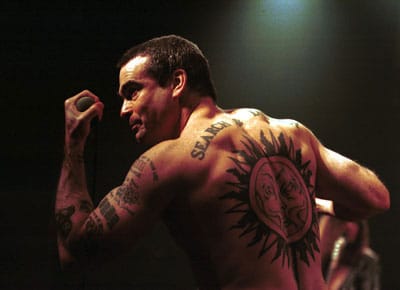 Built by The Iron

On Episode 177 of Barbell Shrugged, we shared a little of our training history.

In total, Mike, Doug and I have been pursuing strength collectively for over 50 years. Our mileage is high, but the clear upside of all that barbell time is that it’s the source of countless hard-earned lessons and immense personal change.

We didn’t have time to get into why we started training on this show. Maybe we’ll do that soon. But until then, I’d like to start by sharing one of my biggest influences growing up, and a huge reason why I started lifting weights – Henry Rollins.

One of my big influences, Henry Rollins.

In the early 90’s I came across a magazine article written by Henry entitled, Iron and the soul. I already knew about him from Black Flag, a band I watched all the time on MTV’s old Headbanger’s Ball. But this was the first time I had ever heard him talk about training, why he started lifting weights, and what it really means to be strong.

I’ve gone back and read that article every year or so for my entire lifting career, it’s that good. Henry has now captured that story on his new podcast, and I have to say, it’s a must-listen for anyone who’s into training and wants to get strong.

I’ve always identified with Henry because we both seemed to be punk middle-class ADD kids. The only difference was that he was a skinny runt who spent a lot of time crammed against school lockers, while I was your average fat kid who carried around a lot more than his body weight.

But Henry made it. He worked his ass off, took the risks and made himself into a rock front man, spoken-word artist, actor, writer, publisher, you name it. I always told myself that there was nothing stopping me from doing the same damn thing. In fact, I haven’t stopped saying that.

In Henry’s case, his strength journey began with his 8th-grade history teacher, a quiet, very intense, jacked Vietnam Vet named Mr. Pepperman. Apparently, this was an impressive guy who wasn’t beyond snatching teenagers over his head in class to set examples and establish respect. A real no bullshit kind of guy, you know?

“Hello, I’m Mr. Pepperman. Walk in, sit down, open your book and shut your mouth.”

Mr. P trained, and he could tell that Henry was curious about that. He could also see for himself that there was no better candidate for barbell work. Henry had shit confidence and no real direction at home, but he was willing to listen and he worked super hard. So, Mr. Pepperman kicked Henry a hard truth that would change his life forever.

“You’re a skinny little (insert expletive here). You need to lift weights, and I’m going to show you how.”

Mentor. Tune into BarbellShrugged.com later today for a great Henry Rollins story. Help me share it and maybe I can get him on the @barbellshruggedpodcast 😉#barbellshrugged

Mr. Pepperman’s simple strength lessons apply just as well today, to any person and any situation:

All this help came for free, but there was one condition in place. Henry was not allowed to look at himself at all for the next few months, from the start of fall semester on through Christmas break.

The motive was simple – he wanted Henry to be focused on the work. The daily habit of piling up repetitions is what matters most in building strength. It helps to be highly focused. Also, having a senior father figure type coach to guide you and engage with makes all the difference in the world.

If you think you’re weak, just consider where Henry began. Under Mr. P’s direction he went out and bought a 100-pound department store weight set, but then struggled to load it into his own car when it was time to take it home. But he wouldn’t stay weak for long.

Henry stuck to his promise. Week after week, he avoided mirrors and any glimpse of himself, but of course he noticed the changes. Within a month, he started to get picked for teams in gym class, which was a brand new development. He was also always hungry, as evidenced by his typical lunch of a double hamburger with six cartons of whole milk. That’s always a great sign that your training is heading in the right direction.

By the time Henry was allowed to look at himself at Christmas, a full metamorphosis had taken place. He was no bodybuilder, of course. That’s not something you can achieve with just a few months work. But he did have biceps and big back muscles now. He looked very strong, precisely because his kept his focus on the daily effort, not the reward.Henry’s reaction, once he did finally look in the mirror, say’s it all.

Bigger muscles are great for all sorts of reasons, there’s little doubt. But weights don’t lift themselves. The primary reward that comes with heavy barbell training is an incredible sense of accomplishment and satisfaction.

Strength is something you earn, repetition by repetition. When you lift heavy barbells, you are empowered, both physically and mentally. Your point of view is strengthened. Your voice grows distinct and loud. All in all, a physically stronger you is a much better you. That’s the real lesson of The Iron. It doesn’t matter where you’re starting. Pick a time of day, go to the gym and hit it, no matter what’s in the way. That kind of habit and commitment that will transform your life.

Come lift heavy barbells with us. Check out our all-new Shrugged Strength Challenge.

I won’t lie, it would be a dream come true to have Henry on Barbell Shrugged to talk training and life. Fortunately, YOU can help me make that happen! 🙂

A big thanks to Henry, and also to Mr. Pepperman. Sir, you ended up changing a lot of lives for the better. We will always work as hard as possible to pay the favor forward and do the same.