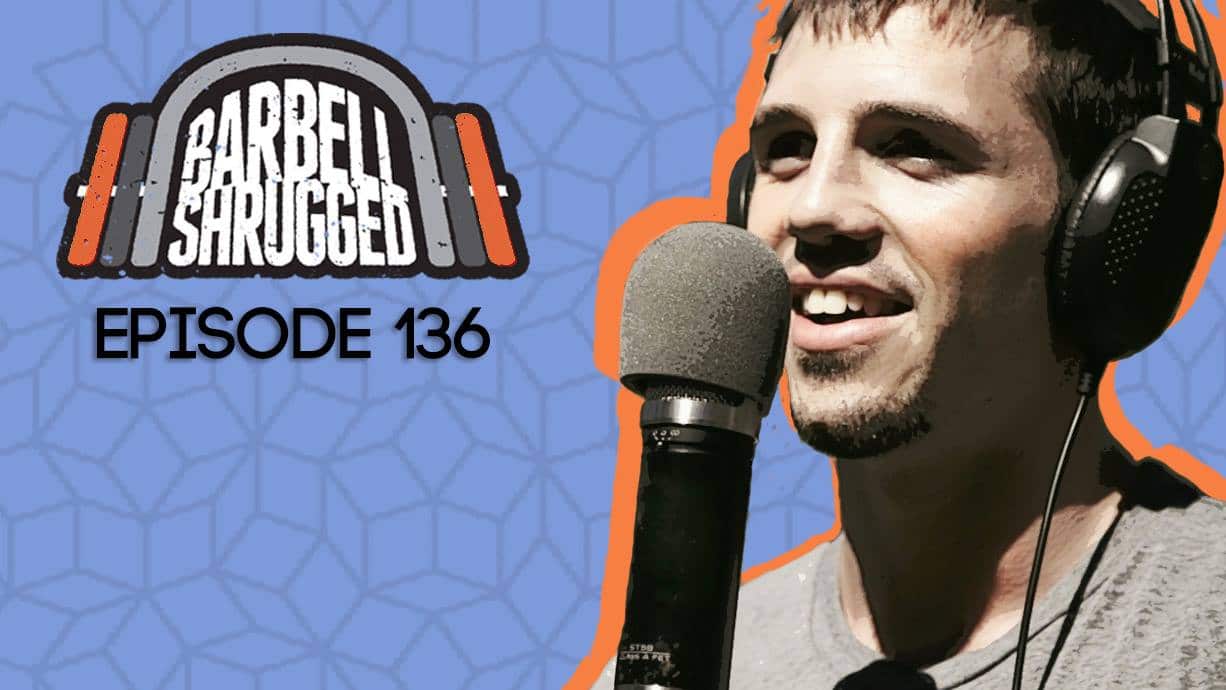 This week on Barbell Shrugged we are busting training myths with our old college buddy Dr. Andy Galpin, Professor and Researcher at California State University, Fullerton.

This is Andy’s third appearance on the show. We first got together to chat about muscle physiology way back on episode 19. Most recently, he helped us break down the science of mixed martial arts with the one and only Bas Rutten on episode 91 (this is also the show where Mike get’s kicked in the balls by Bas, a classic moment indeed). Those were both awesome shows, but this latest discussion was probably our best so far. Maybe we have the combination of Glenlivet and the bright California sunshine to thank for that.

After a bit of catching up we got right into some training myths, starting with a common misconception in the fighting community. These athletes are a lot like Crossfitters, in that they are very driven. They train very hard, and they generally do everything they can to improve performance. Effort isn’t the problem. The real issue is that they don’t really plan for a rest properly, and they don’t understand fatigue and cumulative stress. For them, more is just better. There is one speed – Train as hard as possible no matter what, “or else you’re a pussy!”

Of course this isn’t true at all. Andy’s currently working closely with MMA athletes to educate, as well as help them to train more effectively and recover more quickly so that they can maximize fight performance and reduce their risk of injury.

A fairly simple scientific tool that Andy has utilized with these fighters is the force plate. In a highly objective way, Andy can point out the data when an athlete produces force at a less than optimal rate. In other words, he can show the athlete exactly when they are moving, “slower than a middle school girl.” Sure, many of these folks are really strong. They are tough, bulletproof with big lungs, but they are slow and it’s killing their performance. If you only did one thing in the gym, you would try and get faster. Speed kills, in just about every sport.

All lifters and competitive fitness athletes should take note of Andy’s advice for fixing this problem. “If you’re getting tired during your speed work, then you’re doing it wrong.” Cut the reps and start performing every repetition with the explicit goal of moving absolutely as fast as you can. In many cases this coaching point was good for a 20% improvement in force production, which amounts to a significantly more damaging strike. Write this little pearl down, friends. Before you do anything else, consider doing less, going faster, and training more often.

Sure, “More is better” and “tired is good” are common misconceptions amongst fighters, but the actual myth busting on this show didn’t really start until we began out chat about nutritional supplements. On the top of that list, as always, is Creatine. Despite huge volumes of research supporting its use, many people still have the wrong idea about it, which is frustrating. First thing’s first, you can think of creatine as if it were the fifth macronutrient right next to carbohydrate, fat, protein and alcohol. Having an abundance of this energy substrate in the muscle does significantly improve performance, there is no doubt about it. Creatine also manages to do that without any known side effects, including the classic fretting over water retention (Myth!).

The simple truth is that you will be a more powerful athlete, for longer, if you take creatine. Also, this is currently one of the most heavily researched supplements for improving overall mental acuity and long term mental health. Just consider the work being done on Parkinson’s disease, which is extraordinary. If you aren’t taking it, you probably should be. Once you start, you probably should;t stop, as cycling on and off is completely unnecessary. Remember, it’s better to think of creatine as a nutrient, not a drug. Nutrients aren’t the sorts of things you cycle off of.

Another classic training myth is the function of lactic acid in muscular fatigue. Andy brought us up to speed with the truth. As it turns out, this particular myth is rooted in a 120 year old hunting journal, where elevated lactate levels were observed in killed, bagged deer stags. The easy observation to make was that these increased levels had to be associated with fatigue. That sounds reasonable, but as Andy will tell you, it’s complete fiction. The truth is that lactate is possibly the single most-preferred fuel source in the human body. It also actively works to hydrate tissue and reduce acidity by capturing and shuttling hydrogen ions down the metabolic pipeline. That’s a very big deal.

No, lactic acid is not your problem. That much Andy is sure of. Now, when it comes to explaining what does actually cause fatigue? Science has some ideas, but the truth is that we still don’t know. I guess Andy still has some work to do to keep him busy around the laboratory.

One of the final, big myths we take on in this episode is all about muscle mass and endurance. You’ve no doubt heard those old time, unfounded concerns that athletes who strength train will only end up muscle bound and immobile. We know that this is silly and untrue. Some of the fittest, most mobile human being’s alive train with really heavy barbells, just about all of the time, and they are huge! You just have to make room in your training regimen for some structured mobility work, the fix is that simple. Work at it and you’ll improve. Ignore it and you’ll get worse. Who knew? The same thing can be said of muscular endurance. Metabolism occurs in the muscle tissue, so having more of it can only improve one’s endurance potential. In that light, the classic fighting myth that being too muscled only makes you get tired more quickly…Yep, complete bullshit. That is, unless the athlete in question never works on their endurance. Remember, you get back what you put out.