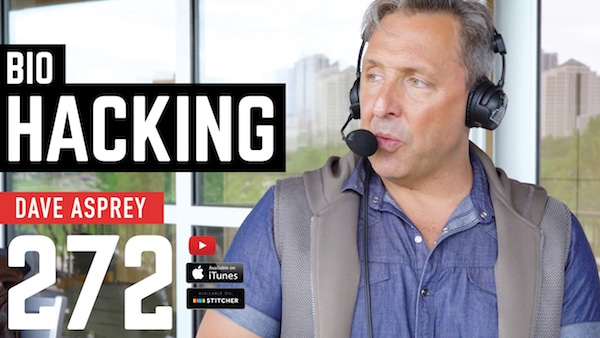 This week, we went to Bulletproof to meet with founder Dave Asprey (Twitter: @bulletproofexec), a company you might know best for the “butter in your coffee” craze. But Dave’s work, and Bulletproof, are so much more — they’re in the business of “biohacking,” or changing your environment inside and out so that you can have the most possible control of your biology.

Dave was a guy who was doing everything right (by the standards of the time) — he was in the gym for 90 minutes a day, six days a week, doing cardio and lifting weights; he’d eat salads and bran muffins. But as he describes it, he was still fat and didn’t feel very good. It wasn’t until later, when he was an executive at a non-profit for anti-aging research, that he began to understand the nutritive shortcuts — the biohacks — that we can activate for our best health. He started blogging about it on the side, as a way to get karma points for any versions of his 20-year-old self who might be interested in learning early instead of learning the hard way. And out of that grew the Bulletproof biohacking empire. We also discuss his new bestselling book, Head Strong, and about how he’s tried and failed on both a raw vegan diet and a full keto diet. Listen in as he talks to us about being the boss of your mitochondria, how nootropics compare to “smart drugs” for brain performance, and how there’s not a lot of convincing science to support coffee enemas… Something we wish we’d known a few weeks earlier. This Week on Barbell Shrugged, We Interview Dave Asprey to Discuss:

Additional books mentioned by Dave in this episode:

The Better Baby Book by Lana Asprey and Dave Asprey

The Bulletproof Diet by Dave Asprey

Subscribe to Itunes (iPhone) or Stitcher (android) for audio: