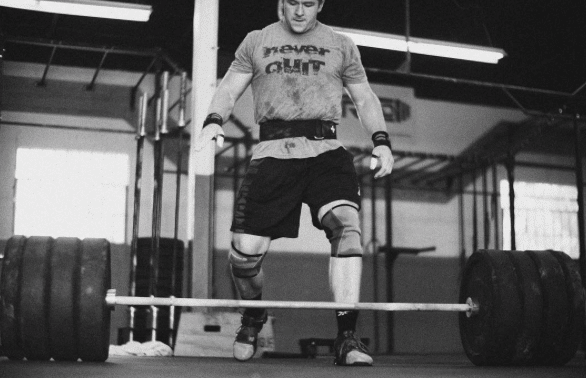 One story always comes to mind when I think of Mike.

It was years ago, before Barbell Shrugged. I was still competing at the time, mostly in novice strongman events. They were always a blast, especially the atlas stones.

We trained each Saturday morning, in a dungeon-like back room of the original Crossfit Memphis facility. It had all we needed, plenty of weights, heavy sleds, some stones up to 400 pounds…We were even planning on making some heavier, just as soon as we could lift them!

All the strongmen rallied weekly to lift the big one, including me. But as big as we were, we didn’t find success. That is, until we saw the young Crossfitter Mike McG do it one morning with speed and ease.

That stone was more than twice his size, and what’s more, he lifted it with a smile. The only agenda was fun, as he just wrapped a local half-marathon less than an hour before. That just blew our minds.

A video posted by BarbellShrugged.com (@barbellshruggedpodcast) on Jan 21, 2016 at 3:35pm PST

From that day on we all worked to a much higher standard. We moved faster, trained harder, and grew stronger. We took ourselves far less seriously, and all at once, I never used my own strength as an excuse for being overweight. Mike was the proof, after all.

He showed me that excess wasn’t necessary, only heart and effort. It’s the same energy he brings to every challenge, and why he’s continued to experience so much success as a Crossfit Games competitor, professional fitness athlete and Coach.

That energy and the smiles make all the difference in the world.
I’m excited and honored to announce that Mike McGoldrick as the latest new host of The Barbell Shrugged Podcast. I have no doubt, the show couldn’t be in stronger hands.

Also, I’m a big fan of “Between Two Barbells.” Looking forward to seeing you bring back the show, Mike. 🙂