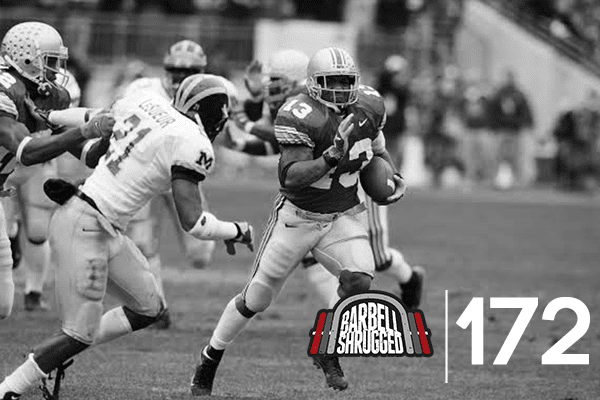 This week on Barbell Shrugged we sit down with one of the most talented and inspirational football players in the history of the sport, Maurice Clarett.

For a time, Maurice was the number one-rated football player in the entire world. Coming out of high school he had done it all – He set all of the rushing records, he scored the most touchdowns. In short, he was unstoppable. A true blue chip prospect.

Curiously enough, that talent was only equalled by a good friend who happened to live just 30 minutes up the road in Ohio. Sure, He played a different sport, but Maurice and Lebron together sold out a ton of high school games.

The raw athletic talent in this photo is hard to imagine.

Maurice began to mature as an athlete during his freshman year at Ohio State.

He developed a deeper understanding of the game and was more confident than ever carrying the ball. He also started to notice that his strength and overall physical abilities were extraordinary, even compared to other high-level college football players.

These numbers explain a lot about Maurice’s dominance on the field. Just imagine trying to tackle a lightening fast, 238-pound running back that can also bench press 430 pounds, back squat around 870, and casually hang-clean about 340 pounds. That’s right, it’s hard to imagine tackling that guy.

You should have a sense of it by now. For a time, Maurice was unstoppable…For a time.

Catch the full story from ESPN – A can’t miss show.

Shortly after pushing OSU to a national title his freshman year, Maurice’s life began to unravel. It’s a stunning story.

The initial mistake was accepting benefits as a student-athlete, which isn’t an uncommon thing. Money. A car. New clothes…These are hard things for superstar, broke college athletes to turn down at times.

Maurice paid for it by getting kicked out OSU, which doesn’t seem all that bad at first. Dominating running backs usually do just fine in the NFL. But, in this case, there was a league rule in the way – All eligible players had to wait at least three years after graduating high school before going pro.

This was bigger and more costly than any single mistake because it changed the conditions. Maurice was no longer on the verge of superstardom. Now, he was no different than anybody else in his old neighborhood.

He was smart. He was talented, a true freak athlete. But what do you do when the only thing you’ve ever known is removed from your life? Sure, it’s only three years but that’s a long time in the hood, where the daily threats and bad opportunities are very real and abundant.

In that situation, you or I would fair no better.

The pressures were too real and too close. Maurice caught a robbery case. He began to struggle with drugs and alcohol. Eventually he would be stopped, but only after an illegal U-Turn and a high-speed chase with local police.

In the vehicle, within reach, Maurice had a few swords (that’s right), a loaded assault rifle and two handguns, along with an open bottle of vodka. As he said on the show, he had no backup plan here. This was rock bottom. He called his mother to say goodbye, because he figured the only way out now was for the police to end his story.

The fortunate, albeit painful thing was that Maurice was only tazed and incarcerated. The path ahead wasn’t going to be easy, but as it turns out, his conditions would soon change for the better.

Check out Maurice and Cory Gregory on the 13 and the Prez podcast.

First, he spent a full 7-months in solitary confinement, which is hard to appreciate in words alone. It’s beyond torturous for most, but as Maurice described it, for him it was more like an enforced meditative state. It was chance to get to know himself for the first time, without the pressures and distractions of football or the old neighborhood. He had all the time in the world to answer a simple question, “What kind of thinking brought me here, and what will get me out?”

The answer was education. Maurice didn’t view his three years and eleven months in prison as incarceration alone, it was actually a great time for personal development and growth. He shared his story and guidance with other inmates, along with the philosophy, psychology and business books he was rapidly consuming and integrating.

This was the foundation of his new life. He now understood something that has empowered and changed the lives of many people – The more you can educate yourself and help others, the more personal success you will experience. This is the mindset that has fueled Maurice’s return to the game of football, his new life as an entrepreneur and speaker, his recovery.

As impressive as this guy was on the football field and in the gym, I think his level of personal growth and change since is even more extraordinary. If Maurice can move on from solitary, read a few hundred books, start a few businesses and changes lives, what’s stopping you?

It must be said, every fresh start begins with a willingness to learn and change. The more, the better.

This is my current collection of audiobooks. Going to grab some more today. Ppl often ask me what it is that I listen to…. Here it is.

Maurice, it was a pleasure talking with you. Next time we’re up in Ohio we’ll have to come by and train with you at Old School.