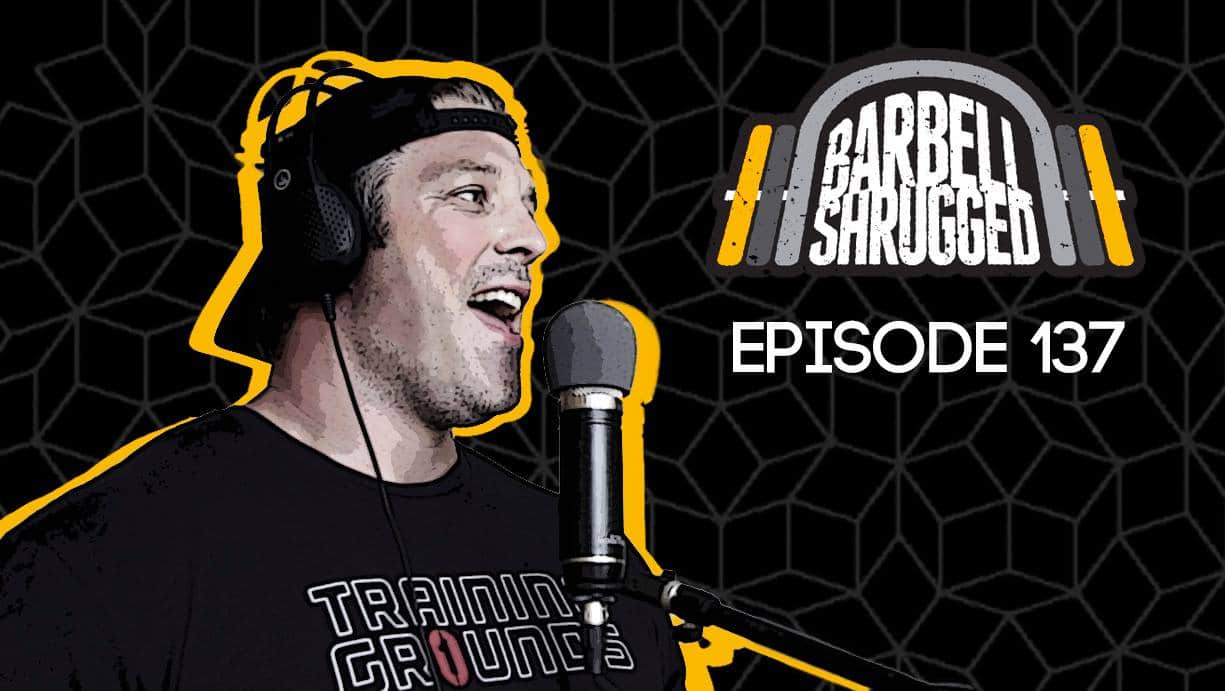 Several months back the entire Barbell Shrugged crew called into the 50th episode of Power Athlete Radio. We had a blast chatting and bullshitting with the entire Crossfit Football crew, so I knew this interview with John Welbourn was going to be great. But I’ll be honest. I did forget just how big he is.

At 6 ft 5 in and 310 lbs, this man is not your average Crossfit Coach. John reminds me of Tony Robbins’ larger, more athletic, Warrior/Mercenary brother. To borrow a phrase from the fantastic movie Shallow Hal, shaking that mitt of a hand really was like grabbing a bunch of bananas.

Don’t get me wrong, there are some amazing people in the sport of fitness. Athlete’s are getting fitter by the day, while also getting strong enough to compete nationally as competitive lifters. That’s extraordinary. But that said, the world of the NFL is a few level’s up, to say the least. Just check out this video of John and his former colleagues warming up before a “WOD.” Your Fran time is awesome, dude, but I don’t think it’s going to be much help if you find yourself on the other side of the line from one of these real-life juggernauts.

John was an incredible Football player, but he’s an even more impressive competitor. Did you know that he competed in the 2008 Crossfit Games? It’s True! You can see an old video on John WODing right here. That’s a super-duper impressive feat for a guy that large. “Why didn’t he lose some weight so that he could be more competitive,” you might ask. The answer is that he wasn’t done playing professional football yet! That’s right. He went off to training camp just a few weeks after the Games, which for lack of a better phrase, really takes balls.

I really enjoyed talking with John. It brought back so many memories of my own career, which had many up’s and down’s, but was an amazing time in my life. Just in case you were wondering, no, I was no John Welbourn. Not even close. But I did alright, and I did it with a bitchin’ haircut. But I also wanted to thank him for showcasing the most important strength lesson in his Crossfit Football programming. That’s this, listen closely – If you want to get really strong and maximize your result, you have to train appropriately.

I know,  I know, the strongest people you can name train Westside, Smolov, Sheiko, whatever, so why not you? Why not do as the strong do? Well, because you have only been training a few years, not a decade or two. You don’t have the skill, the foundation, the muscle mass, or the recovery potential to take on such programming, so the only thing you’re going to get is frustrated, tired and hurt. The key to long lasting and enduring strength is to progress up to the intermediate and advanced levels ONLY WHEN IT IS REQUIRED! To be more specific, you should do the simplest possible thing until it stops working for you. Only then should you make things fancier and more complicated.

That fundamental approach is baked right into John’s programming. If you are in need of some strength and power, but you also don’t want to give up an inch of your overall athleticism, you really can’t beat Crossfit Football. Give it a try, just be honest with yourself. Are you an Amateur, Collegiate, or Professional level athlete? You’ll truly know by the results you get. Be honest.

P.S. As we discussed with John, one of the key secrets to getting really strong is understanding just when variation is necessary in your programming. This week on TechniqueWOD, Doug’s going to teach you three squat variations that will help you address weaknesses and take your strength up to the next level. Click here to check it out.