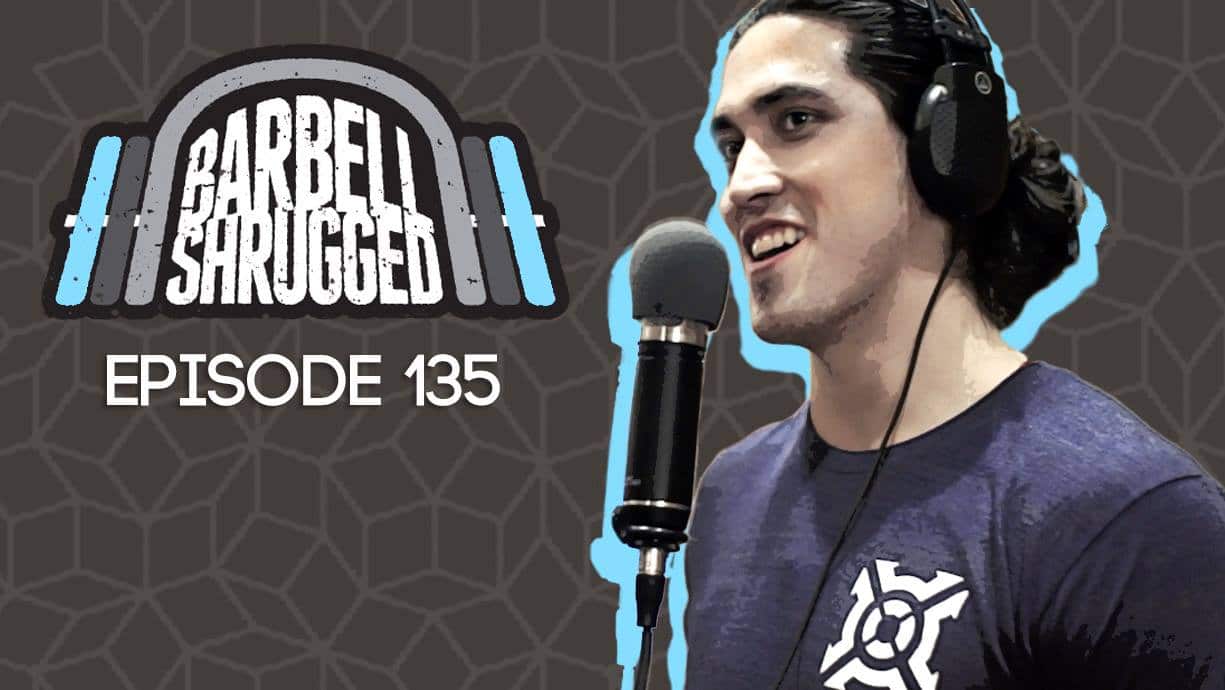 This week on Barbell Shrugged we have the pleasure of welcoming the big man, Aja Barto back to the show. In case you missed it, make sure to go back and check out his last appearance on Episode 76. It’s always a great conversation.

We caught up with Aja at the 2014 USA Weightlifting Nationals in Salt Lake City, Utah. Our chat came before his turn on the platform, but I knew he was going to put up some large numbers. Just look at his recent training. At 6 foot 5 inches and 220 pounds of bodyweight, Aja has put up a 250 pound strict press, a 520 pound back squat, a400 pound squat jerk, just for starters. That’s very impressive. I wasn’t surprised to hear that he later snatched 310 pounds and clean and jerked 352 at the meet. Hey, not too shabby for a Crossfitter, right?

It actually might be more accurate to call Aja a Weightlifter, at least for the time being. He made news earlier this year when he decided to sit out the 2014 Crossfit season in favor of pursuing Weightlifting full-time. His reasoning was simple, “I just decided I wanted to see what I could do if I completely dedicated myself to it, without having the interference of burpees and box jumps.”

Interference might actually be too strong of a word. The truth is that Aja has made a really strong run in competitive fitness for several years in a row now, ascending from Crossfit rookie to three-time Games athlete in relatively short order. But despite that success, he ran into the same problem that just about every other athlete comes across eventually – Progress started getting really tough. The easiest gains were long gone.

As Aja saw it he had two choices. First, he could spend another year beating himself up with tough METCONS in hopes of moving up a spot or two at the Games, but he’s the first to admit that it probably wouldn’t have made that much of a difference. The alternative was to switch gears. Instead of another year of the same old thing, Aja decided to commit himself to getting really strong, to refining his technique, to seeing just what he’s capable of on the platform. It’s a wise move. He’s definitely stronger, and will probably end up being much fitter in the long-run, should he return to competitive WODs.

Between you and I, I do hope he does make a return. He’s just too much of a beast not to. But the return might come in some other sport all-together. Sure, he could do proper Crossfit again, but I was thinking he should try something a little different this time. Something a little more powerful, shorter in duration, and befitting a behemoth of his size. Yeah, I was thinking he should actually give the NPGL a try. I guess we’ll see, right?

For more from Aja, make sure to check out Behemoth Crossfit. You can also follow the man and his monster lifts on Instagram, Twitter, and YoutTube. Aja, it was great to see you dude. Take your time with the Weightlifting. I don’t think we’ve seen your strongest work yet.

P.S. You can METCON hard until the cows come home, but improving the quality of your weightlifting requires focus. Like Aja, you should consider taking an extended period of time and maximizing your strength. It will change the way you perform on everything. You also need to put in the repetitions and nail down your form, right from the start. Begin the right way. This week on TechniqueWOD, Doug will teach you everything you need to know about the snatch starting position.